Many transit agencies have their schedule data in GTFS format but need to show each route’s schedule to users on a website. GTFS-to-HTML automates the process of creating these schedules. BlinkTag created an open source project to convert transit data in GTFS formatinto human-readable, user-friendly transit timetables in HTML or PDF format. Automating HTML schedule generation makes it easy to keep schedules up to date when data changes and reduces the likelihood of errors.

GTFS-to-HTML is currently used by dozens of transit agencies to power the timetables on their websites, for example this route on Marin Tranit's website.

A user-friendly web-based interface for trying out GTFS-to-HTML is available at gtfstohtml.com. Using this interface, there is no need to download or configure any code to generate timetables for any transit agency on the fly.

View on GTFS-to-HTML-as-a-service on Github → 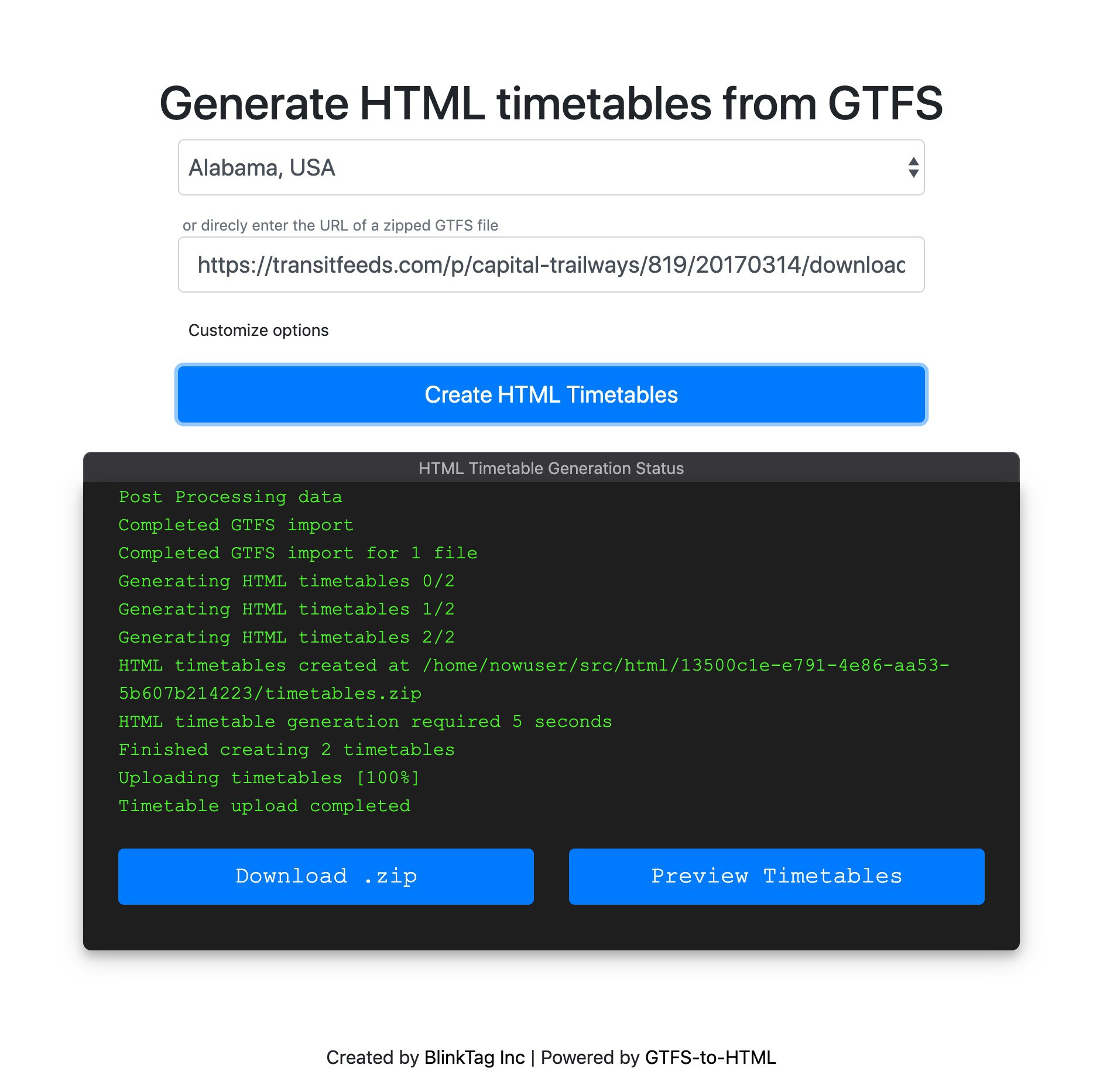 GTFS-to-HTML also generates route maps based on the spatial data contained in GTFS. This can be used for individual route maps, or to create a system-wide map, like the interactive system map on marintransit.org. BlinkTag created separate but related library GTFS-to-geoJSON to extract spatial data from GTFS.

As part of this project, BlinkTag created node-gtfs, a more general purpose library for importing and querying GTFS data. GTFS-to-HTML relies on this library.

View on node-GTFS on Github →

As a way of visualizing the vehicles on an individual route through space and time, BlinkTag created GTFS-to-Chart

BlinkTag created an open source transit arrivals widget that creates a user-friendly transit realtime arrival widget in HTML format directly from [GTFS and GTFS-RT transit data](http://gtfs.org/). Most transit agencies have schedule data in GTFS format and many publish realtime arrivals using GTFS-RT. This project generates HTML, JS and CSS for use on a transit agency website to allow users to see when the next vehicle is arriving at a specific stop.

BlinkTag has helped numerous transit agencies implement the GTFS-to-HTML system to power the timetables map maps on their website. Reach out to us if you'd like to discuss options for implementing GTFS-to-HTML.